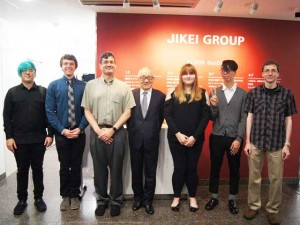 The Jikei Group of Colleges hosted the Semester in Japan Program once again, welcoming five students and one professor from the University of West Florida (UWF) to Japan for five weeks. The Semester in Japan program is based on the educational partnership between the Jikei Group and the University of West Florida. This year marks the 26th incarnation of the program, which provides UWF students with an opportunity to learn about Japanese culture.

The Semester in Japan program is a UWF credit-bearing program promoting cultural exchange between students and faculty members at Jikei Group and the UWF while deepening mutual understanding between the two institutions. The students engaged in Japanese society-related field work during their stay in Japan, learning about Japanese society, culture, and history. The students from the UWF also took part in a number of programs together with students and faculty members from the Jikei Group. A few of these programs will be introduced here.

The program participants from the UWF also took part in a cultural exchange program with Saitama College of Social Welfare and Child Care over the two days of May 25 and 26.

On the first day they explored Kawagoe City, where they visited various sites such as Kitain Temple and its 500 Arhats as well as Hikawa Shrine and learned about Japanese culture. In the afternoon, the group moved on to the city of Kawagoe itself and walked along the main street and enjoyed the clay-walled warehouse-style buildings.

On the second day, they traveled to Omiya City and visited Saitama City Manga Museum, Saitama City Omiya Bonsai Art Museum, and Saitama Prefectural Museum of History and Folklore in the morning, and gained a greater understanding of Japanese history 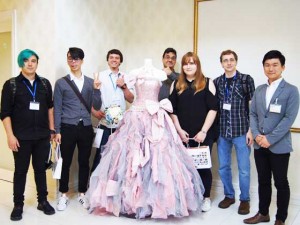 In the afternoon, the program participants finally made their way to Saitama College of Social Welfare and Child Care. At the school, the participants from the UWF interacted with the second year students. The students from both schools formed groups and exchanged views about Japanese sweets, Japanese games from the past, and Japanese pop culture. The time spent together let the students once more appreciate the importance of communication.

The group then spent a week traveling in Japan. After they returned to Tokyo, they attended a lecture by Jikei Group of College Chairperson Kunihiko Ukifune on June 16 at the International Language Center Tokyo Campus. In his lecture, Chairperson Ukifune spoke about how the Jikei Group has grown in tandem with the vicissitudes of society and how the group has trained professionals working on the front lines of many industries. Chairperson Ukifune, who holds an honorary doctorate from the UWF, also talked about the long history of educational exchange between the UWF and the Jikei Group.

The program came to a conclusion the following day on June 17. Before setting off for the United States, the program participants expressed their gratitude to the Jikei Group saying, “We had a wonderful experience in Japan thanks to everyone in the Jikei. We hope that even more students from the UWF have the opportunity to take part in this program.” The Jikei Group of Colleges will seek to further deepen our relationship with the University of West Florida in the future and develop a program that provides even better opportunities for international education.