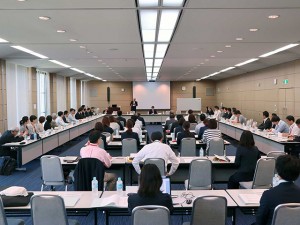 The annual International Affairs Meeting of the Jikei Group of Colleges was held from July 26 to July 27 at the Biwako Club, the Jikei Group’s corporate retreat overlooking Lake Biwa in Shiga Prefecture. The meeting was attended by approximately seventy participants from Japan and from overseas, including representatives from group schools and support companies; managers and staff members from the overseas offices in China, Korea, Australia, Europe, and the United States; along with the group’s executive managing directors and special guests from Japan IR&C Corp. and Meitetsu International Travel.

Jikei Group of Colleges Chairperson Kunihiko Ukifune gave his opening address on the topic of “Considering Security and Safety from a Fresh Perspective.” In his speech, Chairperson Ukifune highlighted the need to ensure the safety and security of both Jikei Group students studying abroad as well as international students pursuing studies at group schools.

Chairperson Ukifune also announced the publication of the English version of “Professor Yunus’s Social Business,” a manga narrating the life of Professor Muhammad Yunus, who was awarded the 2006 Nobel Peace Prize for his efforts with the Grameen Bank to create economic and social development. The manga was developed as a joint project between the Jikei Group and Yunus & Shiiki Social Business Research Center at Kyushu University.

Mr. Hisato Yamashita from Japan IR&C Corp. delivered the keynote speech, entitled “Learning from University Study Abroad Program Incidents: Jikei Group Crisis Management.” In his speech, Mr. Yamashita discussed crisis management for students participating in study abroad and exchange programs overseas and emphasized how important it is for school corporations to be prepared for emergencies and to have a crisis management system in place.

Representatives from Jikei East Group, Jikei West Group, and Jikei COM Group gave presentations that showcased a number of important international activities and topics including group graduates currently active around the world, such as graduates working at the Soccer World Cup and well-known wineries in Europe; long-term study abroad programs at the Collective School of Music and other institutions; as well as the World Congress of the International Society for Prosthetics and Orthotics coming up in October to be held at the Kobe Convention Center and organized by ISPO Japan.

Representatives from Jikei Shanghai Center, Jikei Australia Center, Jikei Europe Center, Jikei American Center in Los Angeles, and Jikei American Center at the University of West Florida gave presentations on their programs and topics of focus, including the safety and well-being of students participating in study abroad programs, the increase in online education delivered via smartphones in China, and the long-term English language study programs in the United States and Australia attended by Jikei Group English Speech Contest winners, among other topics.

As in previous years, participants enjoyed a barbecue prepared by the friendly and welcoming staff at Biwako Cottage and were later treated to an exciting performance of classic jazz standards later in the evening by graduates from the Koyo School of Music & Dance.