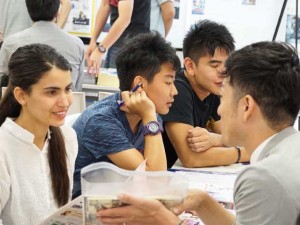 The 2017 Toyo Language School Career Fair was held on July 20 and 21 to provide assistance for students as they decide the next step along their career path. The fair brought together professionals representing five possible career paths for students under one roof, including professional training colleges, universities, graduate schools, art universities, and companies.

At this year’s career fair, Toyo Language School welcomed representatives from thirty-four organizations such as educational institutions, including sixteen schools from the Jikei Group, as well as corporations, making it one of the largest such events at a Japanese language school.

With this year’s fair expanded to two days, Toyo Language School decided to take on an additional challenge. A career fair such as this provides a unique opportunity for students to speak with many people from various industries and educational institutions and use the opportunity to polish their communication skills for interviews, and the school decided to take advantage of the fair to provide classes for students ahead of the career fair to learn how to give interviewers a good impression. 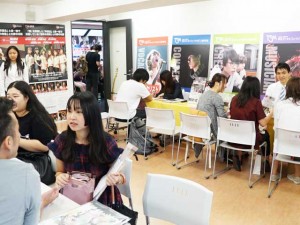 In the classes, students were introduced to some of the common mistakes people make during interviews. Using role-plays, the international students worked on two situations where they typically do not perform well. These are giving proper responses that show a person is being an active and thoughtful listener when listening to other people and asking appropriate questions when asked if they have any questions during an interview. Students are taught that saying they do not have any questions is considered rude and that they should prepare such questions in advance.

One hundred and fifty students signed up for trial lessons at Jikei Group schools following the career fair, nearly double the eighty-nine students who signed up the previous year. Toyo Language School was able to create opportunities for students to learn more about Jikei Group schools and help them save time when making decisions about their next step.

The representatives from companies and educational institutions had praise for the attitude among the students taking part in the fair with comments such as, “The students listened with enthusiasm,” “Unlike students at other Japanese language schools or career fairs, the TLS students asked many questions,” and “This was our first time at the fair, and the students were so enthusiastic that we want to take part again next year.”

Toyo Language School will keep in contact with the representatives from the Jikei Group schools and provide support to the students in order to help them realize their career goals.