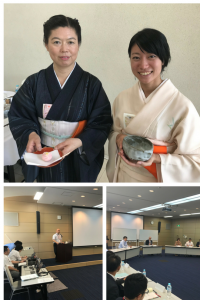 The Jikei Group of Colleges held its annual International Affairs Meeting on July 27 at the group’s corporate retreat nestled on the scenic shores of Lake Biwa in Shiga Prefecture. The meeting was hosted by the International Center for the Jikei Group and welcomed eighty people from Japan and abroad, including representatives from group schools and support companies; managers and staff members from the overseas offices in China, Korea, Australia, Europe, and the United States; along with special guests from Meitetsu World Travel and the Ministry of Foreign Affairs of Japan. The meeting was chaired by Hideo Watanabe, Executive Director of International Center, Headquarters.

The keynote speaker for this year’s meeting was Mr. Yoshinori Hironaka, Deputy Director of the Consular Affairs Bureau’s Japanese Nationals Overseas Safety Division from the Ministry of Foreign Affairs of Japan. For his presentation, Mr. Hironaka discussed the various risks Japanese nationals face when traveling overseas, including fraud, theft, natural disasters, and acts of terror among others, giving examples of some the cases that have made headlines in Japan and around the world, such as the murder of language student Natsumi Kogawa in Vancouver in 2017 and the students killed or injured in the 2011 Christchurch Earthquake in New Zealand.

Mr. Hironaka went on to discuss the steps that students in the Jikei Group can take to keep their overseas experience from taking a turn for the worse, saying that students need to gather information, become more aware of their surroundings, and take appropriate action to remain safe. He provided a checklist for faculty members to use to be proactive in their efforts to keep students away from harm and to respond effectively when something unfortunate does happen. In the final part of his presentation, Mr. Hironake gave an overview of the services and support the Ministry of Foreign Affairs provides to Japanese nationals in the event of crises and introduced the wealth of information available on the ministry website, such as consular emails and timely information covering the local situation and risks. Moreover, he talked about the importance of properly dealing with interviews and fielding inquiries from the media for colleges in the event of a crisis, making simulating crisis management particularly useful.

Jikei Group of Colleges Chairperson Kunihiko Ukifune kicked off the roundtable discussion on study abroad programs in the Jikei Group with a talk on how the programs fit into the group’s curriculum policy and broader mission to produce graduates who can work anywhere in the world. He spoke about how curriculums in the Jikei Group are created based on the group’s three founding principles of Practical Education, Humanistic Education, and International Education as well as how all the individual aspects of the group’s curriculum policy including collaborative education with industry, career education, and self-management training all come together to form the essence of the group’s educational programs.

The various groups and school corporations that make up the Jikei Group of Colleges gave presentations on their international affairs-related activities and efforts. The speakers gave overviews of the many programs conducted around the world in France, the United States, Finland and countless other countries. In particular, the presentations focused on efforts to strengthen pre-departure training and education along with follow-up training once students have returned to Japan after the program has concluded.

Kobe Jikei Gakuen School Corporation discussed its educational partnership with Mahidol University in Thailand, the country’s only ISPO category one school, and introduced the clinical training program in Thailand that one of the students from Kobe College of Medical Welfare took part in as part of the partnership.

Attendees also heard about the upcoming International Society for Prosthetics and Orthotics World Congress scheduled to take place in Kobe, Hyogo Prefecture in October of 2019. The theme of the congress will be “Basics to Bionics” and will highlight the diversity of programs and projects the organization undertakes and its focus on developing new technological solutions. The event will be co-organized by ISPO Japan, which also co-organized the first ISPO Global Educators Meeting from June 25-27, 2014 in Kobe, Japan. The ISPO Japan office is hosted by the Kobe College of Medical Welfare, Sanda Campus.

The Japanese Language Education Panel, English Education Panel, and the Overseas Professional Education Research Panel from the JESC International Education Sub-Committee gave presentations on their international education-related activities over the past years along with news about future projects and initiatives. The presenters discussed original Japanese teaching materials created for international students based on actual needs and the benefits of tie-ups between corporate partners and professional postsecondary courses, among other topics.

The attendees were also treated to a report on the educational partnership between Koyo School of Music & Dance and Berklee College of Music. The presentation highlighted the long history of the partnership as well as the transfer program between the two institutions. At the end of the presentation, attendees heard a video message from one of the recipients of the Ukifune Scholarship created for student from the Jikei Group pursuing music studies at Berklee.

The representatives from each of the overseas offices gave lively presentations on their international programs. The various speakers discussed the innovative use of WeChat and other social media platforms in its efforts to recruits potential international student in China, faculty development and student training programs delivered for faculty and staff from long-time Jikei partners Keimyung College University and Keisei University in Korea, and the long-term English language study programs in the United States and Australia attended by Jikei Group English Speech Contest winners, among other topics.

Attendees were treated to Japanese tea and confectionaries during the lunch break and capped off the day with a BBQ prepared by the friendly and welcoming staff at Biwako Cottage. Japanese graduates from the Berklee School of Music who had originally begun their music studies at Koyo School of Music & Dance entertained the meeting participants with a rousing performance of classic jazz standards later in the evening.