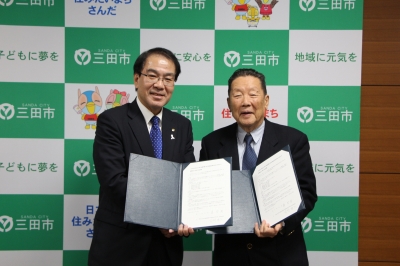 At the signing ceremony held at the Sanda City Hall, Mayor Tetsuo Mori asked for the school’s assistance saying, “Since Kobe College of Medical Welfare trains professionals in the field of health care, I want to ask you to lend us the strength of youth for the sake of the city of Sanda.” In response, Seishi Sawamura, principal of the school, said, “Our students are studying day after day to help people. Our students will make the best use of their skills and knowledge to provide assistance. This agreement will enable us to increase even more our contributions to the community.