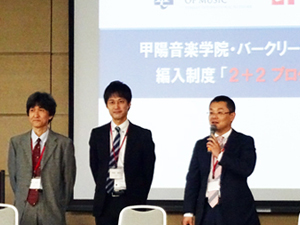 The meeting was attended by sixty-nine people, including the overseas center managers from China, Korea, the United States, Europe, and Australia as well as representatives from Jikei Group schools and corporations. The participants discussed International Education–which the Jikei Group has established as one of the Founding Principles of the group, together with Practical Education, Humanistic Education–and actively exchanged opinions regarding educating global professionals.

The different departments delivered presentations on international affairs-related business at the meeting. These included a presentation on the 2 + 2 Program given by representatives from Koyo Conservatory of Music, speaking on behalf of the music schools in the Jikei Group of Colleges (Kobe City), whereby students can transfer to Berklee as a third-year student after studying at Koyo for two years, following the conclusion of a partnership agreement in April of this year between the Jikei Group of Colleges and Berklee College of Music, one of the world’s top modern music schools in genres such as jazz, concluded a partnership agreement. Following up on discussions from last year’s meeting regarding policies for dealing with crises such as terrorist attacks, proposals for guidelines for handling unexpected crises such as outbreaks of infectious diseases and terrorist attacks at study abroad program destinations were created and selected. 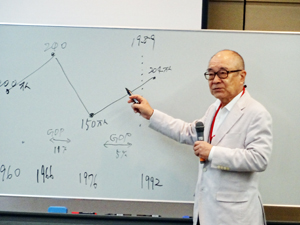 The meeting was chaired by Hideo Watanabe, Executive Director of the International Center, and Chairperson Ukifune gave the keynote speech, entitled “Considerations for the Sixth Five-Year Plan,” which outlined the fundamental considerations regarding international operations when setting down the group’s sixth medium-term business plan starting next year.

Chairperson Ukifune explained the importance of watching the changes in the social landscape when considering the new five-year plan. The shift from a global to a national perspective can be seen in the UK’s decision to leave the EU and the direction of the US presidential election. Chairperson Ukifune also offered his view that the professional education the Jikei Group provides is the kind of vocational education that the countries of Asian are seeking and that professional education in Asia will attract more and more attention down the road.

He said that it is vital that the International Education Committee think about the future, for example, what the situation will be like five years from now. Chairperson Ukifune also added that professional education in Asia, coordination between industry, government, and the academic world, and faculty development will become the three key phrases for professional education in the future. During the Sixth Five-Year Plan, the Jikei Group will need to further develop its strengths, foster innovation, and communicate its message to an even wider audience.

Session One: Presentations from each section on international education, such as dispatching sports trainers to the Rio Olympics and Paralympics

The participants heard presentations on education from each of the divisions in the Jikei Group. 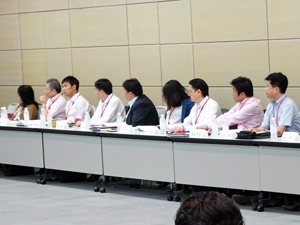 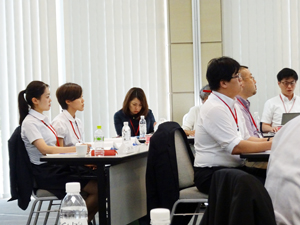 The presentations from East Group reported on the new partnership agreement with Schulthess Klinik in Zürich, Switzerland, which is well known as one of the world’s top five orthopedic clinics; the partnership agreements with FIFA, the city of Odense in Denmark, and the city’s board of education; and the Rio Olympic and Paralympic’s certification of TMS and the school’s dispatch of thirteen trainers to the games.

During its presentations, West Group spoke about inbound programs from Shanghai University of Medicine & Health Sciences and Shanghai University of Traditional Chinese Medicine, clinical training for prosthetists and orthotists at Mahidon University, and cooperation between Helsinki University in Finland and the dental hygienist departments. And finally, COM Group representatives discussed its coordination with the University of Hawaii Nursing Department, the hotel internship program with Australia’s University of Queensland Hospitality and Tourism Department, and the International Manga Cultural Exchange Event, which included the China-Japan Manga Cultural Exchange Competition between semi-professional manga artists in China and Jikei Group students. 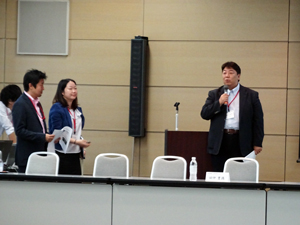 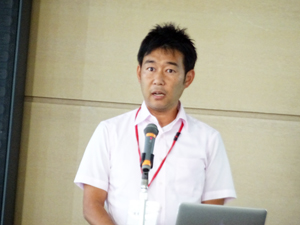 Toyo Language School reported that the number of new students has been growing year by year, and the number of new students from countries such as China and Taiwan in 2015 was 394. Students followed a number of paths following graduation. 28.3% chose to continue their studies at universities or graduate schools such as the University of Tokyo Graduate School and Tokyo University of the Arts while 43.4% (138 students) elected to enroll in professional training colleges, including those in the Jikei Group. Participants also heard about other cases, such as the story about the international student from Thailand who was a member of Class A7, the lowest level class at the Japanese school, who went on to enroll in the Medical Research Department at the University of Ho Chi Minh Graduate School. 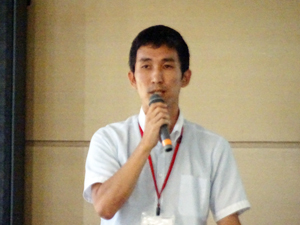 Handling the international education programs under the circumstances of Global Terrorism

Chairperson Ukifune also addressed the issue of dealing with a crisis situation during study abroad programs and touched upon the group’s decision to cancel all of this year’s study abroad programs to France in response to the six-month extension of the state of emergency there. He spoke about the importance of putting oneself in the position of parents and guardians and asked the participants to choose universities and institutions which take responsibility when they accept our students and to stay vigilant and create study abroad programs with safety in mind. At the same time, he asked that participants not neglect crisis management training for both accompanying staff members as well as staff members who remain behind in Japan.

Meitetsu World Travel explained the importance of travel insurance to prepare against overseas terrorist acts and also spoke about the cancellation of study abroad tours. They also addressed the issue of cancellation fee claims from overseas service providers and recommended enrollment in an insurance plan with a rider that insures against travel changes.

Jikei International Travel provided a report on the number of students who joined the study abroad programs last year. Taking into account the cancellation of programs following the terrorist attacks in Paris in November of last year, the Jikei Group sent 3,439 students to the United States, 406 students to Europe, 1,059 students to Australia, 155 students to China, and 157 students to other destinations for a total of 5,216 students overall. 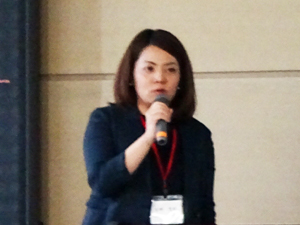 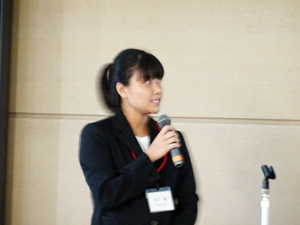 Mr. Takahaku Shimizu, director of Koyo Conservatory of Music, together with Mr. Naoyuki Hosokawa, a graduate of Berklee and vice principal of Koyo, and Mr. Kesuke Okai, assistant teaching department head who also studied at Berklee, gave a joint report on the 2 + 2 Transfer Program with Berklee College of Music as an example of an international education activities case study during the second session.

The team from Koyo reported first of all that students save approximately ten million yen by first studying in Japan for two years compared with beginning their studies as a first year student at Berklee. In addition to this considerable financial advantage, they explained further that students transferring to Berklee School of Music may be eligible to receive a scholarship for international students in accordance with their musical abilities as well as a scholarship from Koyo Conservatory of Music or a full scholarship from the Jikei Group of Colleges.

Osaka Jikei Executive Director and COO Katsunobu Hashimoto gave a presentation on the 2nd Asia Clinical Engineering Forum held in Shanghai, China on September 18 and 19 of this ear. The forum was held in Shanghai to mark the sixtieth anniversary of the founding of Shanghai University of Traditional Chinese Medicine. The forum is expected to lead to international standardized qualifications for clinical engineering technologists in Asia.

Ms. Ai Matsushita, a student in the Physical Therapy Department at the Osaka College of Medical and Welfare, spoke about her experiences studying English in Florida. Ms. Matsushita was a runner up in the Jikei Group of Colleges English Speech Contest and won a five-week trip to study English at the University of West Florida in the city of Pensacola, Florida. During her presentation, she spoke about the differences between education in the United States and Japan and the energy she received from the experience as well as the kindness physical trainers have for their clients. Ms. Matsushita related her thoughts and expressed her gratitude in English, which the audience received with a warm round of applause.

At the end, Chairperson Ukifune spoke about inbound programs and stressed the importance of Japanese-language education while highlighting the importance of making students aware of their goal for coming to Japan and enabling them to work in Japan in the career that they are aiming for. Students returning to their homeland and contributing to their country will connect professional education with the other parts of the world.