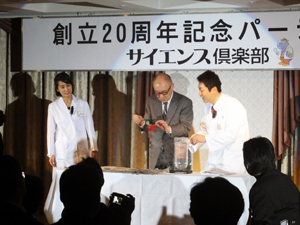 The Jikei Science Club, a science laboratory for children, celebrated its 20th anniversary at the Sun Plaza in Tokyo Ueno Plaza on November 21. The celebrations included a formal ceremony and a get-together afterward.

The Jikei Science Club had its start 20 years ago in 1992, in a laboratory in the then Life Engineering Department of the Nihon College of Health Care Services in Koenji, in Tokyo’s Suginami Ward. The club began with 80 students and has since welcomed over 10,000 students in 21 classrooms across Japan in Tokyo as well as Shinagawa, Chiba, Saitama, and Hyogo Prefectures.

As a gesture of appreciation, approximately 70 guests were invited to the day’s ceremony, including partners and representatives from cooperating companies managing classrooms, graduates acting as assistant instructors, elementary school and junior high school students, and parents and guardians.

The ceremony began with opening remarks from Kunihiko Ukifune, Chairperson of the Jikei Group of Colleges where he told the assembled guests that “The Science Club has seen many promising young people leave the nest over the past 20 years, people who are now currently active their respective fields. It is my sincere hope that some of these talented young people will become Nobel Prize recipients.”

Following a video highlighting the Science Club’s progress over the past 20 years, congratulatory speeches were given by adventurer and essayist Sumio Kondo and Nagisa Tatsumi, author of the million-copy best seller “Suteru Gijyutsu” (The Art of Throwing Away) published by Takara Shima Inc.

A Chuo University student, who passed the National Civil Servant Examination and will begin work at the Ministry of Defense in the spring, spoke on behalf of 19 graduates saying, “My strength comes from the thought process of asking “why?” at the Science Club and the broad perspective I acquired through outdoor studies in nature you usually can’t do. Thankfully, I’ve found a job at the Ministry of Defense. I’ll do my best to defend the country of Japan.” The student’s words drew loud applause from the audience.

Art Director Toshiya Akaiwa then discussed the birth of his creation, Professor Sai (Professor Rhinoceros), the Science Club’s mascot. Revealing the mystery of Professor Sai’s birth 20 years ago, Akaiwa said, “I chose a rhinoceros to be the mascot as a play on the words ‘science’ and ‘saino’ (talent). Professor Sai holds a book in his left hand and a magnifying glass in his right hand. These each represent “knowledge and love of learning” as well as “wisdom and curiosity.”

After the exciting climax of the science experiment show performed by the professors, Professor Hironaga He offered words of thanks for the 20 years and talked about future ambitions saying that, “The Science Club has achieved 20 years thanks to its members. The graduates are Japan’s proud intellectual asset, and we will work on creating a network involving graduates in the future.”